76
In the space of just 48 hours, Real Madrid has taken a major step towards finishing top in the Regular Season and claiming home-court advantage for all the playoff campaign. Following Sunday's win over the team’s closest pursuers in El Clasico, tonight saw the team repeat the feat against third-placed Lenovo Tenerife at the WiZink Center. Laprovittola (21 points, five treys, nine assists and a PIR of 28), Tavares (15 points, four blocks and PIR of 27) and Carroll (13 points in the final quarter)  were the difference-makers for the league leaders, who are riding a 15-game winning streak that has equalled the club’s best start to a calendar year in the competition since the 2013/14 season. In total, the Whites have recorded 29 wins from 30 games with six matches remaining in the Regular Season

With new recruit Vincent Poirier amongst the players not involved, the leaders came out looking disciplined and tore up a 13-2 by the fifth minute. The madridistas were considerably reducing the shooting percentages of a team who leads the way in the league standings in this department, whilst in attack, Laprovittola (six points and three assists) set the tone for Madrid, who made a very strong start from the three-point line (five triples). The change involving Lenovo Tenerife’s inside pairing and Tavares’s exit following two personal fouls saw the guests up their offensive game, but Pablo Laso’s rotation was producing the desired effect and Garuba (five points) and Llull  paced a Madrid team that restored a comfortable advantage following a very solid first-quarter performance (24-16).

Guests level things up
The guest improved thanks to their success on offensive rebounds as they punished Madrid, with Huertas  leading away. The islanders continued to cut away at the lead held by the Whites, who were going through a point drought, to take the lead for the first time on 16 minutes (26-29). The hosts’ risposte came with four small players on court (Abalde at number four) and Garuba. Two treys from Alocén and several plays from Abalde countered the islanders’ run in the second quarter (38-38).

Madrid regained its defensive aggression in the third stanza and produced its best defensive form at a stage when the contest was very much in the balance. The Whites were dominating on rebounds as Tavares imposed himself, causing the Lenovo Tenerife offense to really suffer. The center was in the thick of the action: distributing play from the post, netting points and was a real wall in defense (11 points in the third quarter) as he got the better of Shermadini time and time again. Alongside the inspired Laprovittola, he paced the team to an important 17-6 run that saw Madrid open up an 11-point buffer (55-44, min.27).

Carroll leads way in winning retort
Lenovo Tenerife got right back into contention in the final quarter by capitalising on its success from the three-point line and a series of technical fouls awarded against Laso and Caroll. A Sergio Rodríguez trey put the islanders a point ahead at 61-62 on 33'. However, the technical foul against Carroll brought out all of his pride as the shooting guard netted eight points in a row. Along with Garuba's energy and a fifth triple from Laprovittola, Laso's men established a seven-point lead on 36'
(75-68). Lenovo Tenerife fought back following a surge led by Huertas and Shermadini to make it 75-72 with three minutes remaining, but Madrid still had something left in the tank. That man Carroll stepped up with five points to bring his tally to 13 points in eight minutes and establish a final run of 9-4 to secure a clear 84-76 win. The leaders face anothe league game on Sunday, when Joventut visits the WiZink Center (6:30pm CET). 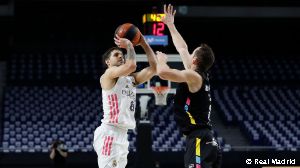 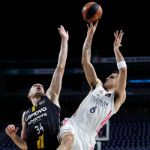