Real Madrid downed Pallacanestro Varese in a 75-67 win in the final in  Munich.
On 6 April 1978, Real Madrid was crowned European champions for the sixth time in the club's history. Four years on from capturing a fifth crown in Nantes against Pallacanestro Varese, our team once again downed the Italians in the final, played in Munich (75-67). This win also saw Madrid become the competition's most decorated team as they edged ahead of their final opponents, who up until this point also had five titles to its name.

Szczerbiak (26 points) and Brabender (16) were the madridistas' top points-scorer in the showpiece, in which the teams headed in at the break with Pallacanestro Varese holding a narrow 40-41 lead. However, the side coached by Lolo Sainz, who was poised to lift the first of his two European Cups at the Real Madrid helm, enjoyed a fine second half to overcome the Italians. This victory contributed to the Whites' legacy in the European Cup, a trophy the club has now secured 10 times. 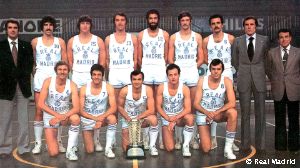