On 6 April 1969, Real Madrid claimed the title on Joventut's floor.
Today marks the 52nd anniversary of Real Madrid's 11th league title. On 6 April 1969, Pedro Ferrándiz's troops sealed glory after a 83-83 stalemate in the road trip to second-placed Joventut in the third-to-last game of the season. This success saw our team secure back-to-back league titles and continue a triumphant cycle featuring 10 league triumphs between 1968 and 1977.

Real Madrid ended the league season on 37 points (W18, D1 and L3) to edge Joventut (33 points) to the title. Clifford Luyk was the madridistas' leading points-scorer with 437 points. This 11th league crown confirmed the dominance of a Madrid team that was the leading light in Europe and Spain basketball. Real Madrid continues to be the competition's most decorated team with 35 titles to its name. 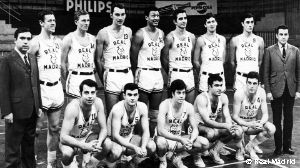