The frontman has been on target every time he's lined up against the English side.
This Tuesday sees Real Madrid host Liverpool in the first leg of the sides' Champions League quarter-final tie (9pm CET). Karim Benzema has taken centre stage in the most recent meetings with the English outfit, with the hitman having netted in each of his outings against Liverpool and registering four times in his three appearances against the club's quarter-final opponents. Liverpool are the Frenchman's second-favourite victims in the Champions League, behind Galatasaray (five goals).

Benzema's first strikes against Liverpool came in the 2014/15 group stage. He bagged a brace in the comfortable 3-0 win at Anfield on Matchday 3, before hitting the winner in the 1-0 triumph at the Santiago Bernabéu a fortnight later. 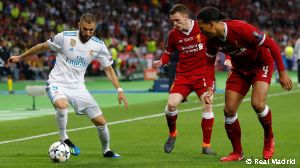