The team faces its third match of the week and will be aiming to pick up its 27th victory in the competition (8pm CET).
Barely 48 hours after Real Madrid’s last outing the team is back in action at the WiZink Center once again to take on Acunsa Gipuzkoa Basket, on matchday 29 of the league campaign (8pm CET). Pablo Laso’s will be vying to pick up their 27th win this season and continue their run in the domestic competition that has yielded 26 wins from 27 games.

The Whites will be looking to claim their second home victory of the week after defeating Olympiacos in the EuroLeague on Friday. Real Madrid has a fine record against the Basque side – picking up 22 wins from 23 matchups.

Real Madrid will have to best at its best against a team that is fighting to move out of the relegation places and nullify the threat posed by the likes of Radoncic, Johnny Dee and Okouo. The hosts are solid in defence and top the charts in terms of defensive rebounds, largely thanks to Tavares who has excelled in this aspect this season (8.4 rebounds on average per game).

Offensive play will be crucial
Madrid will have to be clinical in attack and the team boasts five players who average double-digit scoring. Besides Tavares (19.6 PIR), Causeur (11.5 points) and Deck (10) will also be decisive. 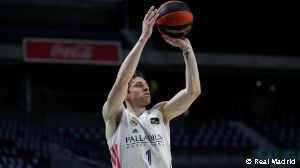