Real Madrid clinched the title with two rounds of games remaining.
On 4 April 1965, Real Madrid basketball team captured the eighth league title in the club's history. The 79-66 victory over Joventut mathematically secured the league honours with two games of the season to go. Pedro Ferrándiz's charges won 13 of the 14 league games to beat
Picadero to the title.

This league triumph represented Real Madrid's sixth title success in a row as the Whites' dominance continued after having won eight of the first nine editions of the competition. Clifford Luyk was the madridistas' top points-scorer in a stunning season that saw the Whites clinch the European Cup, the league and the Spanish Cup. 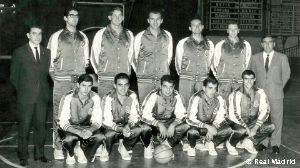