The madridista coach reached the milestone in the match-up against Anadolu Efes.
The match-up against Anadolu Efes saw Pablo Laso manage his 300th EuroLeague game. The coach, who is now into his 10th season at the helm, boasts a record of 210 wins and 90 defeats and a win rate of 70.3%. He is one of the competition's most decorated coaches and has lifted two EuroLeagues and has twice been named as the Best Coach (in 2015 and 2018).

Since taking up the reins at Real Madrid, Laso has led to the team to the summit of European basketball. He has led the Whites to the Final Four on six occasions and guided the team to glory in Madrid in 2015, before clinching the trophy in Belgrade in 2018 and finishing as runners-up in both 2013 and 2014. He currently sits in fifth spot in the standings of the coaches to have overseen the most EuroLeague matches, behind
Obradovic, Messina, Xavi Pascual and Ivanovic, whilst he lies in fourth place in the victory standings. What's more, he's the coach to have won the most games at the same club. 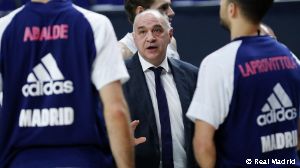