Anadolu Efes won a contest that was evenly matched for the opening 29 minutes. Olympiacos and Fenerbahçe are the opponents in the final two cup finals.
WiZink Center

108
Real Madrid was downed by Anadolu Efes in what was a very hard-fought contest for the opening 29 minutes in which the two teams constantly traded the lead, but the guests powered past the madridistas in the final stages. Garuba and Thompkins, with PIRs of 20 apiece, were the standout performers for the side coached by Pablo Laso, who was overseeing his 300th EuroLeague game. This match-up also marked Rudy's return following injury. The team now faces what are two cup finals in the bid to clinch a playoff spot. The first of these is on Friday, against Olympiacos.

As expected, this proved to be an extremely tight affair right from the get-go. Anadolu Efes made the brighter start with Simon the difference-maker (13 points). His success from the three-point line (three treys) handed the Turks the lead following an 11-18 run in the sixth minute. Taylor's introductionserved to up the Whites' intensity in defense as the hosts got to grips with the guests' shooting guard. In attack, the madridistas began to get up to speed as the minutes ticked by through Alocén (7 points), Garuba (5+4 rebounds) and Tavares (6) to draw level following a 7-0 run at the end of a first stanza in which Rudy made his return a month and a half following his injury (20-20).

Madrid sets the tempo
After having recovered from the guests' initial surge, Madrid continued to grow into the game. The three-pointers began to flow, with the Whites netting no fewer than five in the second quarter. Thompkins, with eight points in a row, put the hosts four points up at 35-31 in the 16th minute. Laso's charges were dominating in the rebound stakes (11 more than the Turks in the first half) and were shackling Larkin, who failed to post any points at the break. However, Anadolu Efes showed just what a strong roster it has as Micic and Sanli replied to the Whites' points, although they couldn't prevent Madrid going in ahead at the interval (42-41).

Anadolu Efes appeared to benefit more from the break and made a strong start to the third stanza. The Turks posted triple after triple and draw a series of fouls from Real Madrid, who also witnessed Tavares call to be replaced after taking a heavy knock to the hip (he didn't return to the court). Once again, Micic and Sanli paced a major run that saw the guests rack up a 14-point advantage in the 27th minute (50-64). Real Madrid now had to find a reaction and turned to Garuba. The youth-team product, who produced a fine physical and technical display (seven points in the quarter), clawed the home side back into the contest to make it 64-70 in the 29th minute.

Whole complexion changed in a minute
It was only 60 seconds but it determined the outcome of the game. With 60 seconds of the third quarter to go, several refereeing decisions went against Real Madrid and led to a series of technical fouls. Rudy committed one of them, whilst Laso picked up two and that led to his sending-off. This took the tempo totally out of the game and allowed Anadolu Efes to shoot from the free-throw line on no fewer than six occasions to establish a 12-point buffer heading into the final quarter (65-76). Madrid kept on plugging away, but the guests increased their advantage, which was now insurmountable. In less than 72 hours' time, the team faces yet another cup final, this time against Olympiacos and once again at the WiZink Center (Friday, 9pm CET). 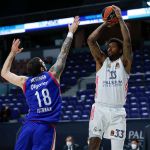