Laso's side secured a crucial win away to Asvel Villeurbanne in the fight for qualification.
Astroballe

74
Real Madrid took a big step towards sealing a place in the EuroLeague playoffs after securing the spoils on the Asvel Villeurbanne court in round 31 of the competition. Pablo Laso’s side came away victorious from the first of their four finals, but to do so they had to show great character and spirit against a very physically demanding team. After trailing in the first half, the Whites turned the score around in the third quarter (14-24) and clinched the victory after a sublime display in the closing stages. Albade (11 points and 14 in PIR) and Garuba (9 and 8 rebounds) were two of the five instrumental players in double-digit ratings.

Both teams began at a ferocious offensive tempo right from the start. Laso put Garuba in the number three position to neutralise Asvel's physical power and the team was able to rack up the points near the hoop with all five players scoring in the first four minutes. The hosts responded with a series of three-pointers (5/7) to turn the first quarter into a continuous battle for the lead (23-20, min.10).

Trailing in the first half
The French team took the initiative at the start of the second quarter, but it was a different game to the opening quarter. Defence took precedence and Asvel's defensive control asserted itself on the game. The hosts punished Madrid's turnovers and Lighty spearheaded his side to an eight-point lead - 33-25 in the 17th minute. Abalde's introduction revived the team's attack, as he shot two three-pointers and a basket from Laprovittola allowed Madrid to reduce the deficit to five points at half-time (37-32).

Despite being behind, Madrid remained solid defensively – the visitors just needed to up their game in offense. A three-pointer from Yabusele put Asvel eight points up again in the early stages of the second half (40-32, min.21). But the team conceded very little in the minutes that followed. Garuba inspired the Whites into a comeback with a spectacular physical display. His determination and vigour spurred Madrid on offensively while Carroll hit five successive points to open up a 6-24 lead and widen the gap before the end of the third quarter at 49-56.

Madrid’s winning spirit
Today’s matchup was a non-stop physical battle. Asvel responded superbly to retake the lead - 61-58 in the 34th minute. The contest followed the same pattern as the first quarter and the fine details were to be decisive. Madrid stepped up its defensive game, controlling the rebound and producing its best period in attack in the form of Thompkins, Deck and a brilliant Abalde. A back-to-back two-point play and three-pointer by the forward brought the score to 63-69 with a minute to go after a 2-11 run. The French side looked to edge it with the three-pointers and pulled the score back to 69-71 with 19 seconds to go. During this time, there was a succession of strategic fouls and Madrid managed the closing period sublimely. Two free throws from Thompkins and a solid defensive effort gave the team the all-important win (71-74). It is the second away win of the week and, in less than 48 hours, the side faces its third trip to Manresa (Saturday, 8:45pm CET). 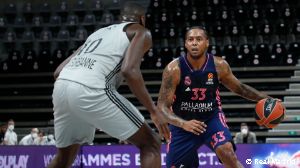