Kaci put the side in front in the first half, but the visitors hit back with two goals in the 55th and 93rd minutes.
Ciudad Real Madrid

2
Real Madrid weren't able to register a positive result away to Levante in matchday 23 of the Primera Iberdrola. Kaci put Real Madrid in front after a delightful team move in the 34th minute, but the team from Valencia drew level after the break and completed the comeback in the last move of the game.

The match got off to a lively start with both teams playing at a high tempo and with plenty of intensity, but it was difficult to create clear-cut chances on goal. The best chance came through Toletti, but Misa kept it out, and then a powerful long-range shot from Kaci which forced a save from Maria in the 20th minute. Shortly afterwards, the Madrid midfielder produced an excellent strike to put David Aznar's side in front. A good team move saw Cardona back-heel the ball to Kenti Robles, and the Mexican set up Kaci to make it 1-0. On the stroke of half-time, Real had the chance to make it 2-0 through Cardona, but the ball was deflected wide.

After the break, Levante equalised from a counter-attack which Esther converted with 55 minutes on the clock. The visitors might even have taken the lead when shots from Andonova and Banini werre saved by Misa. The side from Valencia dominated the game, but Madrid dug in and came close to making it 2-1 on two occasions in the 73rd minute. Jessica Martínez's header hit the post and Tere failed to beat María with the rebound. Despite Madrid's fightback, Levante settled the game in stoppage time with a goal from Alba Redondo in the 93rd minute. 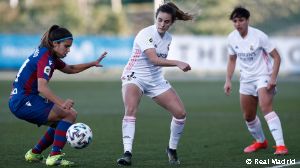 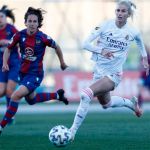