The team failed to claim victory in Round 30 of the EuroLeague season against opponents who were on form from the three-point line.
WiZink Center

96
Real Madrid was beaten by CSKA Moscow and will now have to continue the battle for a EuroLeague play-off spot in the four remaining rounds of the EuroLeague Regular Season. The Whites kept going right until the end against the Russians, despite having trailed throughout as a result of the opponent's form from the three-point line. Thompkins, who had 20 points, and Tavares, who netted a PIR of 31 (12 points and 13 rebounds), were the standout performers for Pablo Laso's men. Regardless of what happens across the rest of the round, Madrid will have a one-win buffer over the team in ninth.

The Whites were the victims of an early 0-8 run, but showed patience and Laso didn't opt to halt the game. The team responded and the performance improved, whilst adjustments were made in defense and the hosts started to move the ball around in offense. Tavares (eight points), Causeur and Thompkins (five apiece) countered the 19 points sunk by the James-Shengelia pairing, who were particularly clinical on three-pointers (five), to restore partity at the end of the first stanza (21-23).

Triples continue to flow
CSKA posted five treys in the second quarter, four of which came after the 16th minute, to establish a lead that exceeded the 10-point mark. The Russians managed to maintain their advantage up until the break by tearing up a 20-32 run. Clyburn was instrumental to this with 16 points. Up until this point, Real Madrid had kept apace in offense with Thompkins the main man and it was his contribution to offensive rebounds that was keeping Madrid in the match  (41-55, min. 20).

There was no change to the script after the interval. The guests sunk a further two triples to make it 43-63 in the 23rd minute. Madrid was holding on thanks to the efforts of Causeur and Deck and the points scored by Thompkins, however, it was only with the introduction of Carroll, who entered the action halfway through the third stanza, that the team found the spark to change the flow of the game. He had nine points in four minutes, which alongiside an improvement in defense, gave rise to a 20-9 run as the hosts put themselves right back in the game with the final quarter to come
(67-74, min.31).

On brink of comeback
With the madridistas improving as the minutes ticked by, CSKA tore up a 0-7 run to establish a +13 lead. There was still time and Real Madrid refused to give in and after the two teams traded runs, the game headed into its final three minutes with the guests still leading by the same advantage (77-90). The Whites put in one final push and brought themselves back to within six points in the space of 30 seconds (84-90), but the fine margins proveed decisive in the dying stages. Two offensive rebounds, a lost possession and a triple that didn't find the basket and Voigtmann's basket left the scores at 89-96. In less than 72 hours' times, the Whites are in league action against Coosur Real Betis (Sunday, 5pm CET). 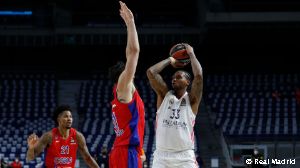 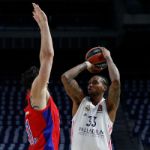