The Argentinian point guard passed the mark in the win against Baskonia in league round 26.
Nicolás Laprovittola played his 100th game for Real Madrid against Baskonia. In his second season at the club, the point guard has won three titles: 1 Copa del Rey and 2 Super Cups. He has played 45 league games, 47 Euroleague games, 5 Copa del Rey and 3 Super Cup. This season his best performance came against Joventut, with 22 points and 31 PIR. 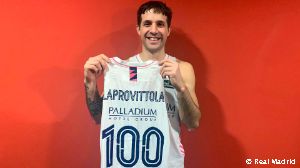