Real Madrid beat Joventut in the final (74-71) with Sabonis as the highest scorer.
On 7 March 1993, Real Madrid claimed its 22nd Basketball Copa del Rey trophy after beating Joventut in the final. Sabonis (25 points) and Biriukov (20) were the top scorers for the Whites, who had to overturn a 15-point deficit. Clifford Luyk's team managed to turn the score around to win 74-71.

The final phase of the competition took place in La Coruña and Real Madrid overcame Caja San Fernando in the quarter-finals (101-89), while Baskonia were defeated in the next round (89-70) on route to the final. The Whites then rounded off the season with a double by winning the league. 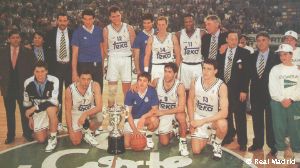