75
Real Madrid head home from Russia with huge win against direct play-off rivals Zenit St. Petersburg. Laso's side came out on top in an evenly-fought clash decided in the final quarter by a 2-9 run in the last 2 minutes and 49 seconds. Tavares posted 16 points, 9 rebounds and 19 PIR, while Deck recorded 15 points, as the two standout men in a superb team performance. With just 6 games left to play, Real Madrid remain in the top eight with 17 wins so far. Thompkins made his return from injury.

The madridistas flew out the blocks in dominant fashion at the Sibor Arena, showing real focus and energy at both ends of the court and delivering a fine display in the opening minutes. In defense, they were well on top of the rebound with Tavares, Garuba, and Taylor shackling Pangos. In offense, Alocén was playing some beautiful basketball to keep the team moving seamlessly. His link-up with the Cape Verde-born center (10 points and 6 rebounds) and Deck's numbers (scoring 22 of the team's 24 points between the three of them) led a fantastic first quarter for Real Madrid, who finished 11 in front (13-24).

Madrid defend their lead
The hosts began to up the pressure as Pangos grew into the game, driving the Russians during the only spell of the first half where Real Madrid weren't on top. Ponitka brought them to within 7 points on 22-29 with 14 on the clock but that was as close as they came for now. Laso's boys were purring, with Alocén and Garuba injecting immense energy levels for long periods and Thompkins marking his comeback with a triple, while Deck and Tavares then picked up the defensive mantle. The center finished the first half with 14 points, 7 rebounds and a PIR of 18, making sure his team maintained their lead at +9 at the break (29-38).

Zenit came out stronger in the second half and got back in the game thanks to a swift 9-0 run. Madrid were faced with a double problem - they gave away several fouls in quick succession and lost their fluidity up top (4 for Tavares and 3 for Alocén, Taylor and Garuba). The Thomas-Poythress duo put the Russians ahead and Baron took their lead to +8 by the end of the third quarter at 58-52.

Superb response by the Whites
Madrid rediscovered the intensity of the first quarter, fighting hard on every possession to cut the deficit. Carroll and Laprovittola stepped up and Tavares' presence made life hard for the Zenit offense. An unreal Deck basket tied the game at 66 with 37 on the clock. Baron then hit a triple to make it 69-66 but Real Madrid had saved their best until last. Three points down and the fans roaring the home side on (a crowd of 3,000 people), every player took it up a gear. Deck, Laprovittola, Taylor and Tavares, the latter with two unbelievable plays (block and a dunk), led the definitive 2-9 in their favour in just over two-and-a-half minutes. Zenit could do nothing to respond and Real Madrid took a hard-fought but well deserved win (71-75, min. 40). It's a big morale boost for Laso's men, who now turn their attentions to LaLiga and their trip to UCAM Murcia (Sunday, 12:30pm CET). 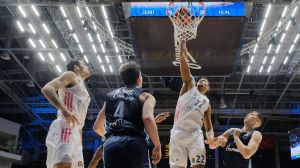