Real Madrid are enjoying an away run that has featured five wins and three draws.
Real Madrid's next outing is a big one as they travel to the Wanda Metropolitano for the derby (4:15pm CET). The Whites head into the encounter bidding to extend the team's current unbeaten run on the road in LaLiga, which currently stands at eight matches.

Since 21 November, Madrid have faced away trips to Villarreal, Sevilla, Éibar, Elche, Osasuna, Alavés, Huesca and Valladolid. The Whites' record in these games is five wins and three draws, with 13 goals for and five against.

Goalscorers
In this run of matches, a whole host of players have weighed in with goals. A total of seven madridistas have found the net (plus an own goal). Karim Benzema leads the way with three goals, followed by Casemiro, Luka Modrić and Raphaël Varane with two strikes apiece. Meanwhile, Eden Hazard, Lucas V. and Mariano have all been on target once. 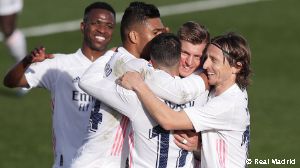