Real Madrid have crossed paths with Atlético de Madrid more than any other opposition since the 2013/14 campaign.
Real Madrid head to the Wanda Metropolitano on Sunday to take on Atlético de Madrid (4:15pm CET) in what will be the thirtieth derby the two teams have played since the 2013/14 campaign. Indeed, the rojiblancos have been the madridistas' most frequent opposition over the course of the last eight seasons.

During this time, the two teams have locked horns in five competitions: LaLiga (15), Champions League (6), Copa del Rey (4), Spanish Super Cup (3) and European Super Cup (1). It's certainly a historic match-up, reflected none more so than by the two Champions League finals between the two sides in Lisbon and Milan, which saw Real Madrid lift the Décima and the Undécima, respectively.

Positive run
Since the European Super Cup final back in August 2018, Madrid are on a run of six derbies undefeated. That streak includes the last final disputed by the two rivals in Jeddah in January 2020, when Zidane's men lifted the Spanish Super Cup following a penalty shoot-out. 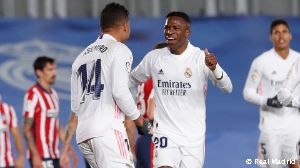