He turned out for Real Madrid between 1956 and 1959, during which time he lifted three European Cup, two league titles and a Latin Cup crown.
On 3 March 2017, Real Madrid bode farewell to one of the club's legends as Raymond Kopa passed away at the age of 85. He will forever be associated with the side that captured the club's first European Cup crowns. The Frenchman represented Real Madrid between 1956 and 1959, during which time the club secured glory in each of the three editions of the elite continental competition.

He was also a member of one of the greatest forward lines in the history of the game, alongside Rial, Puskas, Gento and Di Stéfano. His trophy haul with the Whites features a trio of European Cups, two league titles and a Latin Cup. He clocked up 103 appearances for Real Madrid and found the net 30 times, whilst he claimed the Ballon d'Or in 1958. Kopa is also an iconic figure in the histories of Stade de Reims and the French national team. 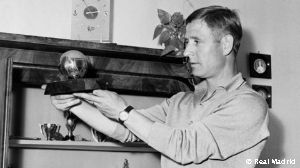