Laso's troops face a road trip to Moscow-based team, before Thursday's match-up against Zenit St Petersburg.
The month of March, which promises to be decisive in the race for the EuroLeague play-offs, is now upon us. Real Madrid opens the month with a double-match week on Russian soil in which the Whites face two match-ups in the space of 48 hours, against Khimki and Zenit St Petersburg. The team will go in search of a 17th win of the European campaign this evening at the Arena Mytishchi, where it has earned victory in two of its last three visits. Laso welcomes Taylor back and travels with 13 men.

Real Madrid received a timely boost following last week's two wins, over Zalgiris and Hereda San Pablo Burgos, ahead of a run of three games in six days, which comes to a close with Sunday's road trip to UCAM Murcia. With eight rounds of the EuroLeague season to go, none of the sides have yet booked a playoff spot. The parity between the teams is such that just three wins separate the top eight teams. The madridistas lie in fourth spot and two wins off the summit. The Whites will be bidding to retain that position against a Khimki side sitting bottom of the pile with a record of 2-23.

Unpredictable opponents
The Russians are always tough opponents. In the reverse fixture at the WiZink Center, Real Madrid ran out 94-85 winners. Khimki was considered as one of the contenders for the title but has failed to meet expectations. The madridistas will face a very different team to the one they took on earlier on in the season. Maltsev has succeeded Kurtinaitis at the helm, whilst Jerebko, Monroe and Booker have all departed and Ponkrashov has been drafted in. One man who will be involved is Shved, who along with former Madrid man Mickey are the Russians' leading lights. The key men on the outside are McCollum, Zaytsev and Bertans.

The Russians' biggest weakness is its defense, which allows an average of 91 points. Despite the raft of injuries that Real Madrid is plagued with (Taylor returns, whilst Thompkins and Alocén are both doubts with ankle sprains), Laso's charges have enough in their armoury, as displayed on Saturday against Hereda San Pablo Burgos. Tavares, who comes into the game fresh from having posted his highest-scoring performance (27 points) and landing the MVP award in the latest league match, Carroll and Deck are convincing options, as are the team's defense and starts to games, which have been instrumental in the recent wins. The Whites posted a +8 in the first stanza against Zalgiris (21-13) and registered a +16 against the Burgos-based team (29-13).

Two wins in previous double-match week on foreign soil
Real Madrid have already contested two games in quick succession against teams in the same country this term and did so with success. In December 2020, the team travelled to Athens to face off against Panathinaikos and Olympiacos, who was downed following three periods of overtimes. This evening's match-up will be the 16th time that the two teams have faced each other and the madridistas have the upper hand with a record of 9-6. 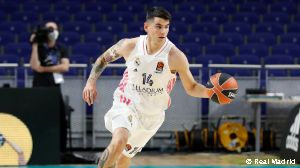