He has made 268 appearances for Real Madrid and lifted 14 pieces of silverware.
Today sees Casemiro celebrate his 29th birthday. The Brazilian, who was born on 23 February 1992, is now into his seventh season at Real Madrid, with whom he has made 268 appearances and found the net 29 times. He has lifted the following 14 trophies during his madridista career: four Champions League crowns, three Club World Cups, a pair of UEFA Super Cups and LaLiga titles apiece, a Copa del Rey and two Spanish Super Cups.

Casemiro is a key cog in the middle third and currently lies second in the team’s scoring charts, with six goals to his name this term. He checked in at the club in the winter of 2013 and initially turned out for Castilla in Segunda División. After spending the 2014/15 season out on loan at Porto, he returned to Real Madrid to write his name into club folklore. A starter in the finals of each of the club’s last three Champions League triumphs, he was on target in the victory over Juventus that secured the Duodécima crown in Cardiff. 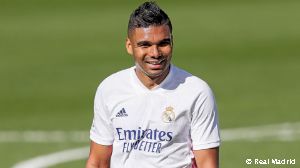