On 22 February 2015, Real Madrid defended the title after beating Barcelona at the Gran Canaria Arena.
It's six years since Real Madrid won their 25th Spanish Basketball Cup. On 22 February 2015, our team defeated Barcelona in the final at the Gran Canaria Arena (71-77). Rudy was the standout player of the match with 16 points and 26 PIR and won that season's MVP. Ayón, Sergio Rodríguez and Nocioni, with 10 points each, backed up the Balearic forward's impressive performance.

Before the final, Real Madrid beat Zaragoza in the quarter-finals (85-73) and Joventut in the semi-final (83-100). Laso's team defended the title they won the previous season and took another step towards the historic five titles in one year: Euroleague, Intercontinental Cup, League, Copa del Rey and Super Cup. 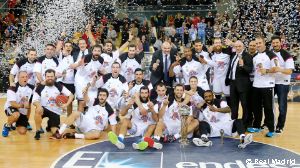