Real Madrid visit Atalanta on Wednesday in the first leg of the last-16 (9:00pm CET).
Two and a half months after wrapping up the group stage with a 2-0 win over Borussia Mönchengladbach, the kings of Europe are back in Champions League action, as Zinedine Zidane's side head into the decisive phase of the competition. The Whites travel to the Bergamo stadium to take on Atalanta in the first leg of the last-16 (Wednesday, 9:00pm CET) and will be vying to gain an advantage in the tie before the return leg which will be played at the Alfredo Di Stéfano stadium on 16 March.

The team goes into the clash against the Italians after finishing top of Group B. After facing Shakhtar, Inter and Borussia Mönchengladbach, Madrid finished top with 10 points and a record of three wins, one draw and two defeats, whilst netting 11 times, including four goals from Karim Benzema.

First Champions League meeting between sides
Meanwhile, Atalanta finished second in their group, winning all three away games. This will be the first time the two sides have met in Europe's top competition. 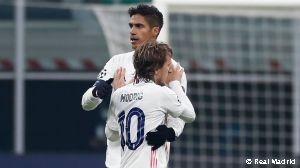