1
Real Madrid picked up another precious three points in the fight for the league title, as Zinedine Zidane’s team defeated Valladolid at the José Zorrilla stadium thanks to a headed goal by Casemiro, as the Whites continue their impressive run. Madrid produced a solid display and have now strung together a run of four consecutive league wins, whilst remaining unbeaten in their last eight away games. But it was Valladolid who carved out the game’s first chance in the seventh minute. Thibaut Courtois produced a double save to first deny Orellana from close range and when the loose ball dropped to Janko, the keeper saved his low effort well with his feet to send the ball over the crossbar.

Real Madrid responded five minutes later when Asensio’s effort from the edge of the box curled over. The visitors then had two goals by Mariano ruled out for offside on 23’ and 30’. The half’s final chance also fell to the madridistas. On 39’, Toni Kroos curled in a free kick from out wide and Casemiro got up well to meet the cross but his header was off target.

Chances
The game remained the same after the break. The visitors dominated and the chances came and went. Kroos whipped in a corner in the 50th minute which was met by the head of Casemiro around the penalty spot, but the effort missed the target. Lucas Vázquez cut inside a minute later and struck a left-footed shot from the edge of the area, bringing the best out in Masip.

Valladolid almost took the lead in the 54th minute, when Orellana latched on to Mendy's clearance and volleyed from inside the box, but Courtois was on hand to produce another fine save. The deciding moment came in the 65th minute when Kroos swung a free-kick in to the back post and Casemiro was on the end of it with an unstoppable header to give Real Madrid the lead. With his side in front, Zidane decided to make three changes at once, bringing on Hugo Duro, who made his debut, as well as Arribas and Isco to replace Mariano, Asensio and Vinicius Jr. as the Whites looked to defend their lead by keeping possession.

Unbeaten for the third game on the bounce
Zidane's side were very clever and managed to hold on to their lead, hardly conceding any chances against an opponent who as the minutes ticked by barely set foot in Courtois' area. The Whites' keeper has now kept three consecutive clean sheets. Real Madrid go into Wednesday's Champions League clash in Bergamo in good form, yet another indicator that the team is in good shape. 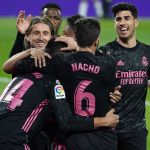