Laso's men have picked up 5 wins in their last 6 away games (9:00pm CET).
Eight days on from going head-to-head in the Copa del Rey quarter-finals, Real Madrid and Valencia Basket lock horns once more on Euroleague matchday 25. It'll be a tough away trip for Laso's men, who head into the closing stretch of the Regular Season hoping to clinch their place in the top four. Our team have won at this court in the league already this season, back in November, and come into this clash in great form on the road with 5 wins in 6 away games.

Real Madrid return to Euroleague action in this week's only match - welcome respite with what is sure to be an intense month of March approaching - eleven fixtures, six of them in the continental competition. There are 10 games still to play at this stage, two of which will come before February is out: Valencia Basket and Zalgiris. Real Madrid sit fourth (15-9), 2 wins off the top, and 2 above the final play-off spot, a place which Valencia Basket are also vying for, sitting in tenth and just one win off eighth (12-12).

The two teams have met on three occasions this season, with two victories for Real Madrid; in the League, 78-86, when they posted their best first half of the year, and in the Copa del Rey quarter-finals, 85-74, just over a week ago. Ponsarnau's men were the victors in the Euroleague clash at the WiZink Center (77-92). Dominance on the rebound will be key for the madridistas, as will bringing down the hosts' three-point percentages and shackling Dubljevic.

Madrid on fire on the road
Laso's team are on a run of 5 wins in their last 6 away trips, and 7 in 9 (Zalgiris, Crvena Zvezda, Panathinaikos, Olympiacos, Anadolu Efes, Bayern Munich and Alba Berlin). The two defeats came by a single point against CSKA and 2 against Maccabi. Meanwhile, Valencia Basket have been stronger on home soil, where they ended a three-match losing streak last week with an epic double over-time win over CSKA . Tonight, the business end of the competition gets underway. 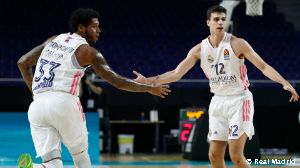