The leaders record their 20th win in the league in a historic match for Pablo Laso.
WiZink Center
65
79
Real Madrid brought the week to a close with a win in the derby against Movistar Estudiantes, making it 20 wins from 21 games, to keep them firmly in the lead in the league ahead of the break for the Copa del Rey. Laso and his men, who today surpassed Lolo Sainz as the coach to have played the most games in the history of the club with 734, overcame their opponents in the final quarter with a 25-14 run and another great team performance. Six players were in double figures, with Causeur (16 points and 21 PIR) and Carroll, back from injury, leading the way (17 and 15).

Llull and Rudy were missing, but with Carroll back in action, Real Madrid played the second derby of the season. The shooting guard, today's starter, wasted not even a minute in demonstrating his formidable touch by scoring a three-pointer to open the scoring. It was the prelude to a big first quarter for the Whites who, with Alocén (5 points) and the American shooting guard (10) in attack and Tavares dominating the rebound (4), took a 10-point lead (12-22, min.10).

Back to square one
The league leader opened up a 13-point lead at the start of the second quarter (12-25), but the game changed in the second period. With the introduction of Barea and Delgado, Movistar Estudiantes reduced the deficit until the comeback reached 35-33 in the 19th minute. Estudiantes hit back with a 23-13 run, which brought the score level at half-time (35-35).

Real Madrid were losing the rebound battle and that made them dig in against a more energetic Movistar Estudiantes led by Avramovic. Taylor also pulled out with an injury at the start of the second half and Garuba, who was contributing the most alongside Carroll and Causeur, had to go to the bench for the same reason a few minutes later. Neither team was able to impose their rhythm, turning the third quarter, the most even of the three, into a continuous alternation on the scoreboard (51-54, min. 30).

Madrid more consistent
Laso's men regained the balance in their play in the final quarter. Tavares became dominant in the area and, with three of their four blockers in the game, cut off the opposition's offence. In attack, Alocén took on the responsibility of supporting Causeur, who was vital for the team. The small forward continued with his display at the rim in the final stretch. Another 8 points from him almost consecutively, with 100% efficiency from three-point range, gave the leader a +11 lead with 5 minutes to go (58-69). Movistar Estudiantes tried to shoot their last atempt, but Madrid were already at their most solid. Thompkins took over from the Frenchman and, with 6 points, answered the home side's final push in a brilliant 10 minutes for the Whites, who decided the match with an 11-point lead (65-79). The week before the Copa del Rey begins. On Thursday, quarter-finals against Valencia Basket (9:30pm, CET). 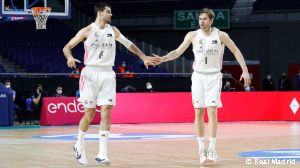 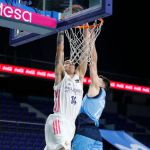