The visitors defeated the Germans to claim their second EuroLeague victory in 48 hours to make it 15 wins. Six players in double digit PIR.
Mercedes-Benz Arena Berlin

72
Real Madrid rounded off a perfect week in the EuroLeague after picking up its second win in the space of 48 hours, its 15th in total in the competition after Wednesday’s sensational display against Panathinaikos. Today the Whites secured the spoils at the Alba Berlin arena with another impressive defensive display, limiting the Berliners to 63 points (Panathinaikos was restricted to 66). Causeur (13 points) and a clinical Alocén in the third quarter (recording 10 of his 12 points), spearheaded the team, who had four other players in PIR double figures (Tavares, Deck, Abalde and Thompkins). Madrid has now won 10 meetings in a row against the Germans.

Real Madrid took the initiative in the opening stages of the match-up, showing great pace and intensity.  The team was well-positioned in defence, controlled the rebound while punishing Alba Berlin on the counterattack. Alocén was once again inspirational at the helm, orchestrating the play (4 assists), while Abalde (7 points and 4 rebounds) and Causeur (7) played their parts in a sublime first quarter for Laso's side (14-22).

Defensive authority sets the tone
In the second quarter the visitors continued from where they had left off and continued to contain the opposition, forcing the hosts into low shooting percentages with Tavares dominating the inside zone (5 rebounds and 3 blocks). Sikma and Lammers kept the Germans in the match against a Madrid side who guarded a comfortable lead thanks to the Pablo Laso’s rotations. The team’s dominance began to fade, but it was Thompkins who produced the goods with 9 points, as the visitors won the second quarter (16-18) to go into halftime with a 10-point lead (30-40).

Alba Berlin stayed true to their direct style of play and looked to the three-point plays to try to reduce the deficit. Eriksson brought the hosts to within six points at 36-42 on the 24' mark, but Madrid withstood the home side's onslaught. Tavares' determination to force the opposition out of the zone allowed the team to press on in attack. Causeur and Alocén, who was pivotal in the third quarter, showed  tremendous confidence to score 10 points allowing the madridistas to remain in control of the game (47-59, min. 30).

Madrid halts the home side's final onslaught
Taylor's intervention at the start of the final quarter opened up a 47-63 lead in the 32nd minute. Aíto García Reneses' team countered by pushing forward in attack, led by Sikma and Lammers. Real Madrid began to struggle to break through the German defence and the gap gradually began to diminish until the lead was reduced to 63-65 with less than two minutes to go.

But the Whites managed to remain focused in the crucial moments. Tavares, with a decisive two-and-one, and a steal by Thompkins on the next play broke the opposition's streak, while Deck added four points for a 0-7 run in the final minute to seal the 63-72 win. Madrid came through the EuroLeague double-header with flying colours and now the team must turn its attention to Sunday's league match-up against Herbalife Gran Canaria (8:00 pm CET) to round off a perfect week. 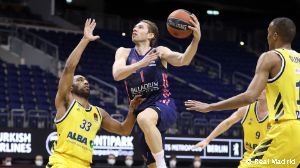