Real Madrid are the best-represented club in the dream team.
Sergio Ramos, Marcelo, Luka Modric and Toni Kroos have been named in the International Federation of Football History & Statistics' (IFFHS) 2011-20 Team of the Decade. The madridista quartet line up alongside Cristiano Ronaldo in a dream team in which the Whites are the best-represented club. The other players to feature in the XI are: Neuer, Lahm, Van Dijk, Iniesta, Messi and Lewandowski. Real Madrid dominated heavily over the past decade after lifting four Champions League trophies in five editions, the last three of which were clinched in successive years (Lisbon in 2014, Milan in 2016, Cardiff in 2017 and Kiev in 2018).

The IFFHS has also released the Conmebol Team of the Decade, which includes Marcelo and Casemiro, as well as Di María, who was a Real Madrid player between 2010 and 2014. Julio César, Thiago Silva, Mascherano, Dani Alves, Messi, Neymar, Paolo Guerrero and Agüero, complete the Conmebol line-up. 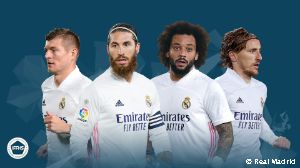