After his brace against Alavés, he's gpt 15 goals and 5 assists.
Karim Benzema continues to add to his impressive goals tally this season. The French forward led the way in the team's last win in Vitoria, bagging a brace, seeing him now involved in 20 goals in 24 games. With 15 goals to his name, Benzema is Real Madrid's top scorer this season and has also chipped in with 5 assists, all in LaLiga, topping the assits charts alongside Rodrygo.

In La iga he's got 10 goals, netting against Levante, Huesca (2), Valencia, Athletic (2), Éibar, Granada and Alavés (2). In the Champions League he's been on taget three times, against Borussia Mönchengladbach twice and Inter Milan. He's also been on the scoresheet in the Super Cup against Athletic. With his assists, he's set up Valverde (against Betis, Barcelona and Huesca) as well as Modrić and Lucas Vázquez (both against Éibar). 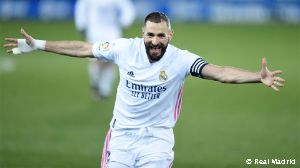