Casemiro, Benzema (2) and Hazard scored the goals for Real Madrid, who beat Alavés to record their twelfth win in LaLiga.
Mendizorroza
1

4
Real Madrid kicked off the second half of the LaLiga season in style with a very complete performance against Alavés at Mendizorroza to claim the three points thanks to goals from Casemiro, Karim Benzema (2) and Eden Hazard. Madrid, who led 3-0 at half-time, dominated the early stages although the first shot came from Joselu, as a result of the intense pressure with which the home side started.

Luka Modrić was the first Madrid player to try his luck from distance, but the first clear chance came after a sensational pass from the Croat with the outside of his boot found Benzema inside the area. The Frenchman received the ball on his chest with his back to goal but he was blocked by Pacheco and the striker’s follow-up effort was tipped onto the post. The resulting corner was swung in by Toni Kroos and Casemiro met the ball to send a downward header into the bottom corner of the net to break the deadlock on the quarter-hour mark.

Madrid in cruise control
Another sublime outside-of-the-boot pass by Modrić played Mendy through on the wing. The full-back squared for Benzema but the pass was superbly intercepted in defence. Then on 27’, Hazard linked up well with Lucas Vázquez in the area and the Belgian curled an effort inches wide of the far post. Before the break, Madrid increased their lead with another two goals. First Hazard flicked the ball onto Benzema, who fired the ball into the top corner from just inside the box on 41’.

Before the hosts knew it, the madridistas had made it 3-0. Kroos regained possession and picked out Hazard’s run through the heart of the Alavés backline. The Madrid attacker brought the ball under his spell and produced a left-footed clipped finish to beat the advancing Pacheco. As they had in the first half, Alavés, who made three changes at the break, came out strongly after the interval and Courtois had to be alert to deny Joselu. Indeed, Joselu it was who reduced the arrears in the 59th minute with a header following a free-kick.

Brace
Vini Jr. entered the fray just minutes before Benzema hit the madridistas’ fourth of the night in the 70th minute. Modric released yet another sublime pass and the Frenchman came in off the left-hand side before bending the ball beyond Pacheco’s reach to complete his brace. Lucas Pérez later came a whisker away from cutting the deficit on 82’, but Madrid held firm to claim the win as attentions now turn to the team’s next outing, against Levante. 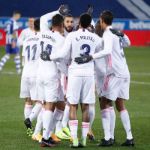