Athletic took the lead in the first half and Benzema reduced the deficit in the 74th minute, but Real Madrid, who smashed two balls against the woodwork, could not find an equaliser.
La Rosaleda

2
The reigning Spanish Super Cup champions were unable to repeat last year’s success in Jeddah. The team fought right until the end to score the goal that would take the game into extra-time, but they could not get past Athletic, who scored two goals in the first half. In the 74th minute Karim Benzema reduced the deficit for Zidane's side, who crashed two balls against the woodwork through Asensio.

The first chance was created by Real Madrid. Eden Hazard’s low left-footed drive was pushed away by Unai Simón for a corner on 10’. Seven minutes later, the Whites went closed again when Toni Kroos swung in a free-kick which was met by Sergio Ramos but his header went straight into the hands of the Athletic keeper. Moments later the deadlock was broken and the Basque side took the lead when Raúl García slotted the ball past Courtois after being played through on goal. The madridistas replied with two chances involving Marcos Asensio. On 26’, his effort curled just wide of the far post and he then got on the end of a Lucas Vázquez cross but his effort went inches wide of Simón’s goal.


Chances
Things took a turn for the worse in the 37th minute when Lucas Vázquez gave away a penalty for a foul on Íñigo Martínez. Up stepped Raúl García to convert from the spot. It was time for a second half comeback. Nacho replaced Varane at the break as Real Madrid pushed on and created the first opening of the second period. Kroos whipped in a set piece in the 52nd minute, but Benzema's header ended up in the hands of Unai Simón. Athletic hit back and Muniain's header two minutes later narrowly missed the target.

Asensio hits the woodwork twice
Real Madrid pressed hard as they looked for a way back in to the match and Asensio came close twice. With 58 minutes gone, his shot from wide skimmed the crossbar before he came close again just four minutes later and after a great pass from Hazard, with his effort striking the post. Zidane brought on Vinicius Jr. and Valverde for Hazard and Modrić, leading to a chance for Asensio who struck the crossbar from distance.

Real Madrid deserved a goal which came in the 74th minute after a move review by VAR. Valverde crossed, Casemiro flicked the ball on and Benzema added the finishing touch. With a quarter of an hour left to go, as the Whites looked to take the game to extra time, Courtois demonstrated great reflexes in a one-on-one to keep out Villalibre. Everything was to play for and Benzema levelled up the match with 82 minutes on the clock, after a great individual move, but the goal was ruled out for offside. Real Madrid penned back the opposition in their own area as they fought until the end, but they were unable to find a way through. 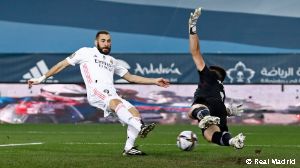 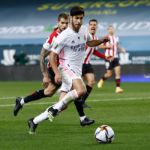