Ramos, Benzema, Asensio, Kroos, Modrić and Isco have all been on target in this competition.
Real Madrid play their opening Spanish Super Cup game on Thursday against Athletic in the semi-finals (9pm). Zidane's team, who will be looking to progress to this Sunday's final and defend the title they won last year have six players in the squad who know what it's like to score in this competition.

Leading the way are Sergio Ramos, Karim Benzema and Marco Asensio, with two goals each. The captain scored in the 2007 and 2008 seasons; the Frenchman was on the scoresheet in 2011 and 2017; and the Majorcan was also amongst the goal in the two Clásicos in 2017, where the Whites won their 10th Spanish Super Cup. The other scorers are Toni Kroos, Luka Modrić and Isco who bagged in last season's semi-final against Valencia, which set Real Madrid on their way to being crowned champions in Jeddah. 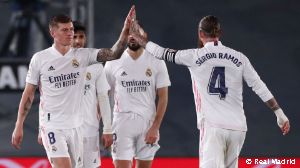