Real Madrid bid to defend the trophy captured a year ago in Jeddah.
Real Madrid will this week bid to clinch the first trophy of the 2020/21 campaign as the team contests the Spanish Super Cup. The holders will be aiming to defend the crown secured 12 months ago in Jeddah in a competition that once again features a four-team line-up: the LaLiga champions (Real Madrid), the LaLiga runners-up (Barcelona) and the Copa del Rey finalists (Real Sociedad and Athletic Club).

Due to the COVID-19 pandemic, this season's edition of the Super Cup will be played on Spanish soil. The semi-finals will be staged in Málaga and Córdoba, with the final to be held in Seville (La Cartuja). Real Madrid will face Athletic Club on Thursday 14 December (9pm CET) for a spot in the showpiece, to be played on the 17th at La Rosaleda, a stadium that holds fond memories for Zinedine Zidane's charges, who lifted the club's 33rd LaLiga title at Málaga's home in the 2016/17 season.

Unprecedented meeting
Madrid are set to lock horns with the Bilbao-based outfit for the first time in the Spanish Super Cup. Our club is one of the competition's most decorated sides, after having tasted glory on 11 occasions. Zidane's men have prevailed in the last two editions they have been involved in (2019/20 and 2017/18). The other semi-final in this year's competition sees Barcelona and Real Sociedad go head-to-head on Wednesday the 13th at Córdoba's Nuevo Arcángel (9pm CET). 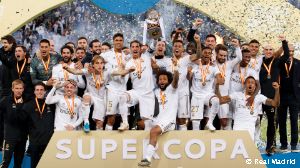