In the second half the team had two chances to the secure the spoils in their first outing of the year.
El Sadar

0
Real Madrid were held to a draw at El Sadar in a match played in harsh conditions due to the snow in Pamplona. Zidane's side, who have gone nine games unbeaten, deserved to get more out of the game after dominating for large spells and having two goals ruled out for offside against Karim Benzema.

Despite the visitors' dominance, it took a while for the chances to come. The first opportunity fell to Osasuna on the half-hour mark. Rubén García swung in a corner and a header by Oier was saved well by Thibaut Courtois. Real Madrid's response came two minutes later when a dangerous cross by Luka Modrić with the outside of the boot called Herrera into action.

Chances
Osasuna pressed higher up after the break but the chances falling to the visitors became clearer as the half wore on. Asensio brought a tricky ball under his spell on the edge of the box and his shot on 49’ forced Herrera into a fine save. Eleven minutes later, Benzema had the ball in the back of the net, turning home a Kross’ cross, but the goal was ruled out for offside against the Frenchman. Zidane brought Valverde on for Asensio, before switching Hazard and Modrić for Isco and Mariano with 75 on the clock.

Second clean sheet in a row
Real Madrid pinned Osasuna back in their penalty area, while the hosts looked to the counterattack. With 89 minutes gone, Sergio Ramos again found the back of the net from a Benzema assist, but once again the goal was chalked off as the forward was adjudged to have been in an offside position. The spoils were ultimately shared and Zidane’s men must now switch their attentions to retaining the Spanish Super Cup title, which sees them take on Athletic in the second semi-final on Thursday.. 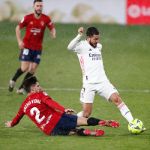