Laso's men are looking for their 7th successive win in the competition against one of the continent's most powerful sides (9:00pm CET).
Seventeen days on from the win over Alba Berlin as the new year begins, Real Madrid return to the Palacio in the Euroleague to take on Olimpia Milan on matchday 18. With 11 wins in 12 games, the last six in a row, Laso's team will be hoping to continue their winning run against one of the most heavily strengthened outfits this season.

Second up against eighth, Real Madrid boast 3 more wins than the Italians, who have played a game less and the Whites must consolidate their fine form in European competition in recent months. The win at Anadolu to see out 2020 and league victories over Tenerife and Andorra at the start of the new year, serve to further demonstrate the squad's strength in depth, with injuries having impacted Randolph, Llull, Deck and, more recently, Rudy. Alex Tyus could be set for his madridista debut this evening.

It's sure to be a demanding game for Real Madrid though, and with Olimpia Milan losing to Baskonia and CSKA in previous matches, they are in need of the points. They've been strong on the road, winning at clubs of the stature of Anadolu Efes, Fenerbahçe and Maccabi, among others. What's more, in the previous meeting between the two sides in Milan in October, the home side clinched a 78-70 victory. This is a team built for a Final Four spot. Punter, Delaney, Shields and Sergio Rodríguez have led the offense for Messina's men, who boast the second-best triple success rate in the Euroleague (40.5%).

Unbeaten against Olimpia Milan on home turf
Real Madrid are the best-rated team in the tournament (97.1), with Tavares and Thompkins the standout men, each averaging upwards of 10 points per game. The head-to-head record clearly marks the Whites out as favourites, having won 15 of the 17 Euroleague encounters. They have also never lost home soil to Olimpia Milan on any of the Italians' eight visits. Tonight, the Euroleague is back at the WiZink Center for a big European night, bringing the week to a close after Sunday's clash with UCAM Murica was postponed. 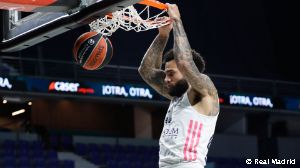