The league leader goes in search of the sixteenth victory in the rescheduled round 11 match (6:30pm CET).
Real Madrid play their second league match in just 48 hours. With barely any rest after beating Iberostar Tenerife at home on Saturday, the leaders visit MoraBanc Andorra in the round 11 game, which was due to be played on November 15 but was postponed due to COVID-19 positives from the home team. Laso's men will be looking for their second win of the year and their 16th in the competition against a side who has won three of their last five matches.

The team from Madrid go into the game after two very important wins, firstly in the league against second placed Iberostar Tenerife, and then against Anadolu Efes in the Euroleague. This afternoon, they will go in search of another win at the M. I. Govern Andorra as they look to keep this good run going. History is on their side having won 16 of the last 21 matches as visitors. The Whites shouldn’t be overconfident going in to the game as they were unable to get the win in Andorra last season.

Third consecutive away match
Pablo Laso will have to manage the tired legs for the team's third consecutive away game. Andora have shooters of the stature of Hannah (12.9 points) and Senglin (12.7). Madrid, however, has plenty of firepower to tackle another highly demanding match. The Whites are the best attack in the league (87.9 points) and lead the way on two point shot success (58.6). Carroll and Thompkins, who were instrumental in the most recent wins against Iberostar and Anadolu, lead Real Madrid's scoring statistics in the league with 10.9 and 10.7 points per game, respectively. 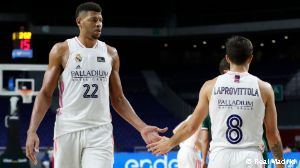