An inspired Abalde, who produced his best performance for the Whites (24 points and a PIR of 27), paced the team to victory over MoraBanc Andorra.
M. I. Govern Andorra

69
75
Real Madrid continues its irresistible form on the road in league match-ups as Pablo Laso's troops posted a second win in 48 hours in this rearranged Matchweek 11 contest on MoraBanc Andorra's floor following on from Saturday's triumph in Tenerife. This latest victory means that the Whites remain undefeated on the road, having won nine times as guests in the competition. Abalde produced a masterclass with his best performance as a madridista (15 of his 24-point haul came in the first stanza and a PIR of 27).
Thompkins (14), Causeur (12) and Carroll (10) supported him in offense as the league leaders won what was a hard-fought encounter in which they led throughout and wrapped up the win in the final quarter.

This trip to the at the M.I Govern Andorra proved to be both a mental and physical test for the team. The Whites travelled from Tenerife to the principality without stopping off in Madrid and against opponents desperately seeking to keep their Copa del Rey qualification hopes alive. What's more, the guests went into battle without the injured Llull, Deck and Randolph. To make up for these absences, Laso turned to the youth of Alocén, Abalde and Garuba alongside Causeur and Tavares. This combination offered great energy when coming out with the ball and the visitors soon took control of proceedings, paced in offense by the outstanding Abalde, who netted 15 points (three treys). In defense, Tavares shone as he grabbed six rebounds. The Whites managed to rack up a +9 advantage to make it 12-21 in the ninth minute.

Madrid resists hosts' surge
The introduction of Paulí and Olumuyiwa offered a greater pace and intensity to MoraBanc Andorra's game and the home side got back into the contest through offensive rebounds to tie things up at 23-23 in the second stanza. With Ibon Navarro's charges riding the crest of a wave, Real Madrid rediscovered its form at both ends of the court. However, this didn't come about without a further setback as Rudy was forced off after pulling a leg muscle following an accidental clash. Thompkins (seven points) and Carroll (five), who made 12 of the team's 14 points in this quarter, ensured the leaders headed into the break in the ascendancy (32-37).

Neither team managed to establish a commanding lead in the third stanza, with Real Madrid always on top but failing to completely pull away. MoraBanc Andorra was having greater joy on the outside with Jelinek and Gielo posting three-pointers. The Whites netted points closer to the basket through Tavares and Abalde, who hit the 20-point mark in what was his most prolific haul as a madridsta. A triple from Taylor curtailed the hosts' fightback as the teams traded another 10 minutes of low scoring as Madrid headed into the final stanza with a 47-51 advantage.

Triple to wrap up victory
MoraBanc Andorra continued to post points from the outside and tied the scores at 53-53 on 32'. However, the league leaders had successfully responded to each of the guests' surges up until this point and did so again here as the team showed concentration and a clinical streak from the three-point line. Two treys from Thompkins and Causeur apiece saw the Whites tear up a priceless 2-13 run that established the biggest lead of the night with four minutes remaining (55-66). The principality-based team kept plugging away through Hannah but Madrid stood firmer than ever. Once again, the strength of the collective, with four players in double figures in the scoring and PIR stakes, secured a workmanlike  69-75 win on a tough floor. Having successfully overcome the first two road trips of the calendar year, the Whites' focus now turns to Friday's EuroLeague match-up against AX Armani Exchange Milan at the WiZink Center (9pm CET). 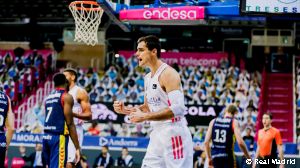