0
Real Madrid began the new year with a win over Celta at the Alfredo Di Stéfano to continue their fine run of form - it's now eight games unbeaten for the Whites, winning seven, sending them provisionally top of the LaLiga table. The duo of Lucas Vázquez and Asensio was key, with each netting a goal and providing an assist for the other.

The game started at break-neck pace and a mere number of seconds was the difference between the score potentially reading 0-1 to go 1-0. With five minutes on the clock, Aspas got the better of Courtois in a one-on-one but Nacho was on hand to clear off the line. The clearance started a swift counter-attack that saw Asensio find Lucas Vázquez with an inch-perfect pass and the Galician ace headed home at the back post.

Chances
Celta did their best to respond with sustained spells of possession but they created little in way of threat to the opposition box, aside from a Denis Suárez cross on 30’ which struck Santi Mina and narrowly missed the target. However, on the stroke of half-time the madridistas came very close to going further in front when Carvajal tried his luck with a sweet volley from the edge of the box.

After the restart, the visitors continued to press, but the killer blow came on 53’. Modrić won back possession inside the Celta half, Casemiro touched the ball on to Lucas Vázquez who squared it to the onrushing Asensio who slotted the ball home with his left foot to make it 2-0. The Whites almost made it three 11 minutes later when a through-ball from Kroos picked out Benzema but the Frenchman’s left-footed finish went agonisingly wide of the far post.

Defence keeps clean sheet
Real Madrid were in full control in the closing period, in which there were few clear-cut chances for either side. On 90’ Benzema went close but his left-footed strike sailed over the crossbar and Baeza had a golden chance in stoppage time to reduce the deficit, but his close-range shot was superbly blocked by the outstanding Nacho. The team finished the clash with a clean sheet and will now turn their attentions to the next league outing, which will be on Saturday 9 January against Osasuna in Pamplona. 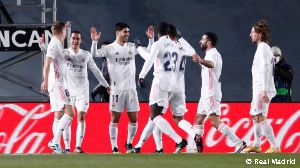 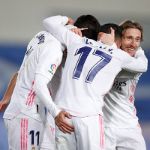