“LaLiga is wide open and in this competition you have to work extremely hard to collect the points,” said the madridista coach (advance).
Zinedine Zidane spoke in a virtual press conference ahead of the Real Madrid-Celta Vigo clash, which will be played at the Alfredo Di Stéfano (Saturday, 9:00 pm CET). The French coach said: “First of all, I would like to wish everyone a happy New Year and send a message of support to those who are having a bad time of it. I hope that 2021 will be a better year. I would also like to send my best wishes to Eusebio, and I hope he can recover from this hard setback."

“There is no magic formula to beat Celta. We know all about them and that we have to put on a great performance. They are playing well and have won six out of the last seven games. It’ll be a tough game for us but we have to ensure we play well. It’s a chance for us to show that we are a good side. In LaLiga there are always tough games and we know we’ll have to work extremely hard to collect the three points. We saw that against Elche. We’ll going to try to put on a top performance.”

The role of Iago Aspas
“Iago Aspas is a spectacular player. He’s a word-class player and has always shown how good he is. He’s the one who can make the difference, you only have to look at his numbers. He’s a very important player for Celta.”

Leading the team
“It demands a lot of you, but it’s a great job. I’m lucky to be the coach of Real Madrid and savour every moment. I’m only interested in giving it everything I’ve got for every game and every training session. I don’t know what will happen in a week’s time, so I have to savour the moment.”

Wide open league
“I think the league is wide open and that’s good to see. As Atletico are top there is a lot of talk about it, but the competition is wide open and it will be like that until the end ”.

“We can only continue working hard and that’s the only thing we can control”.

Renewals for Ramos, Modric and Lucas
“We want this situation to be fixed as soon as possible because it’s in everyone’s interests. I hope it can be fixed quickly”.

Jović
“He’s a Real Madrid player. He hasn’t been playing much recently, but I’m counting on everyone. Things can change very quickly, so it’s important that they are prepared and ready. The season is very long and there are a lot of games”.

Hazard
“He’s come here to prove how good he is. He trains for that and we have a lot of confidence in him. He’s had some tough times, but we’re beginning to see Eden fit into the team”.

Marcelo
“He’s here now and he’s going to stay with us. He’s training well and he’s committed. We’re not interested about what is said on the outside. We’re all working hard and he is working hard just like everyone else”.

David Alaba
“We’re only thinking about tomorrow’s game and about the players we have here. We have a big squad. We have enough on our plate with our day-to-day schedule and we can’t be thinking about players that are not ours”.

Wishes for 2021
“In professional terms I hope none of my players get injured and I hope we can continue doing what we’ve been doing –working hard and trying to win things at the end of the season. I would like to wish everyone a happy New Year and send a message of support to those who are having a bad time of it. I think this year will be better”. 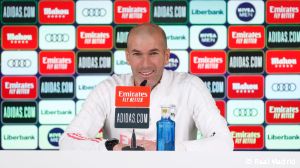