Tavares (PIR of 27) and Garuba (25) inspire team to eighth victory of the month against Alba Berlin.
WiZink Center

62
Real Madrid extended its spectacular winning streak in the EuroLeague, recording its tenth victory in 11 games to remain unbeaten in December unbeaten (8 wins out of 8). The Whites secured the spoils after putting on a dazzling display against Alba Berlin on their return to the WiZink Center three days later. The team showed its class in the second quarter and sealed the victory in the third, with a combined 53-26 run. It was a great collective performance inspired by Tavares, who produced his fourth consecutive double-double in the EuroLeague in a row (16 points, 11 rebounds and a PIR of 27) and Garuba, who recorded his best rating as a Real Madrid player (PIR of 25).

Laso's side took to the court wearing jerseys in support of Randolph and the match-up got off to a frenetic start as both sides battled for the early initiative. Real Madrid dominated around the court except on the rebounds, and this allowed Alba Berlin to keep the pace with the hosts. Garuba, for Madrid, and Thiemann, for the Germans, both with 8 points, led the scoring charts in a very close first quarter (19-18).

The match opens up in the second quarter
Laso rang the changes and Real Madrid moved up a gear at both ends of the court in the second quarter. The hosts began to dominate on the rebound, started to press more and increased the pace in offense. Llull opened up the defence with his penetrating runs and Causeur produced the goods from the perimeter (10 points and PIR of 15 in 10 minutes). Madrid slowly began to gain total control of the game, opening up a 17 point lead on 18' at 43-26. It was a sublime quarter from the Whites (26-12), who left behind the Berliners on 30 points at the break (45-30).

Alba Berlin came out to attack in the second half, but it did not have the desired effect. Everything that had not gone in from the three-point line against Panathinaikos went in today. Carroll, in his first spell in the match, completely opened up the defence in the space of just two minutes. Two of the three-pointers, with Tavares in sensational form (already in double-double scoring), put an end to the visitors' resistance, who saw the hosts move out of sight on the scoreboard. Laprovittola (another two three-pointers) and a dominant Garuba ended another great quarter for their team (27-14), whose lead reached 30 points in the 29th minute (72-42).

Real Madrid dazzles in fine victory
The Whites didn't lose their focus despite being well on course for victory. They produced a top collective display. Alocen came off, and now it was Taylor and Deck's turn. Garuba recorded his best performance in the Madrid jersey (PIR of 25) and Llull also put on a typical display. With two minutes to go and with possession almost over, he scored with one of his trademark shots from his own half. The point guard also became the sixth highest all-time assist maker in the competition, beating Teodosic (1,127). It was the icing on the cake for a complete Real Madrid performance, as the side recorded its biggest win in the competition this season (91-62). Next up it's the Clásico in the league on Sunday against the unbeaten leaders (9:30 pm CET). 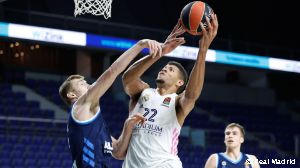 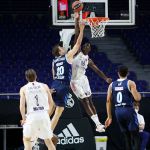