3
Real Madrid won away against Eibar in an entertaining match. The side had to be at their best at Ipurua to pick up the three more points and extend the winning streak to five in a row.  Benzema, Modric and Lucas Vázquez were the scorers for the Whites in a match that got off to a flying start, with both teams forcing the opposition back within the first 40 seconds of the game.

It didn't take long for Real Madrid to open the scoring through Benzema after just 6 minutes, taking the ball down and finishing past Dmitrovic after a fine assist from Rodrygo. With 13 minutes on the clock, the visitors doubled their lead after Lucas V. won the ball high up the pitch before playing in Benzema who beat Rodriguez before pulling back to Modrić to smash the ball home. Éibar were pressing hard, but Zidane's team kept the ball well, building long spells of possessions, playing at pace and causing the home side problems with their fast transitions.

Benzema had the chance to extend the lead but his header went agonisingly wide of the far post. Kike García reduced the deficit before the half-hour mark when he curled in an unstoppable shot from outside the box into the top corner. On 35’, Benzema brought the ball down well and fired the ball into the back of the net with the outside of the boot but he was adjudged to be offside and the goal was ruled out. Then Mendy burst down the left and fired in a low cross, but it was a whisker away from the out-stretching Lucas Vázquez at the back post.

Victory is sealed at the death
The Galician-born Lucas rushed onto a through ball and just beat Dmitrovic to it, but his effort was cleared off the line by Bigas who slid in to clear the danger. In the second half Éibar continued to press, but Zidane’s side were able to keep creating chances. Rodrygo had two good chances to score from inside the area. First he fired over on 67’, then the goalkeeper saved well with his legs when the Brazilian was through on goal. Zidane brought on Asensio and Valverde, and the Majorcan came inches away from scoring from a free kick. In the dying seconds, as the hosts went in search of the equaliser, Madrid secured all three points on 92’ with a goal by Lucas Vázquez on the counter attack. 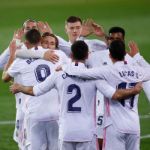