Real Madrid kept plugging away until the final whistle, but ultimately slipped to a one-goal reverse.
Ciudad Real Madrid

1
Real Madrid Women failed to rack up a sixth successive win in the meeting with Atlético Madrid, who took the spoils in the sides' first-ever Primera Iberdrola derby encounter. David Aznar's charges failed to secure any points against Atleti, who scored the only goal of the game with five minutes on the clock through Van Dongen. The winner came following a corner that Aleixandri was unable to control and the Dutch defender gobbled up the rebound to break the deadlock.

Misa kept the scoreline at 1-0 with a fine diving save in the 29th minute to deny Deyna's powerful effort from the corner of the box. Real Madrid stepped up their efforts as they sought to draw level and Jakobsson came close to restoring parity just before the break, but the Swede's shot from the left flank crashed into the side-netting.

Winning run snapped
In the second period, the two teams cancelled each other out and chances were few and far between. Misa once again shone when she pushed Deyna's long-range effort over the bar on 63' in what was the closest the visitors came to scoring. Meanwhile, the madridistas came within a whisker of grabbing a point in injury time when an Atlético player cleared Peter's effort off the line. The team are back in league action on Tuesday when Sporting Club de Huelva are the visitors. 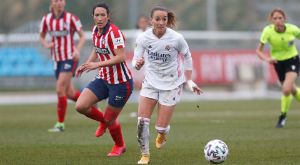 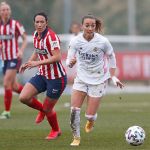