Tavares, who produced his best-ever EuroLeague showing (PIR of 36), and Abalde, who was key in the 10 minutes of overtime, paced the team to a ninth win.
Olympic Sports Center Athens

97
Real Madrid claimed victory over Panathinaikos in the first of the two games to be played in the space of just four days in this EuroLeague double-match week in Athens (the team faces off against Olympiacos on Friday). Just as they had done in the sides' most recent meetings, Pablo Laso's charges came out on top at the OAKA Arena for the fifth time in as many visits. This time round, it took two periods of overtime in a contest in which the team always believed in its chances of victory. Tavares, with another masterclass, posted his best PIR score in the EuroLeague with 36, thanks to his 20 points and 14 rebounds; and Abalde, who shone in the two periods of overtime, in which he netted 15 of his 19 points (his PIR of 24 was also a record in a Madrid jersey) paced the team to a ninth victory in this season's competition.

The two teams got off to a sluggish start at the OAKA, which served up a very different atmosphere to the usual red-hot cauldron. Madrid struggled to get a foothold in the match and was lacking accuracy in offense, with only Randolph (two treys) and Abalde (four points) netting points, as the team trailed in the first stanza. Panathinaikos had an extra gear in its play was doing damage with swift transitions finished off by Papagiannis (15-14, min. 10).

Madrid takes the initiative
There was no increase in tempo in the second quarter but Madrid adapted to the circumstances and the low-scoring nature of the contest in which the defenses had the upper hand. Madrid made a bright start to the second stanza and was fluent in offense and strung together several mid- and long-distance shots, which were key in seeing the team hit the front thanks to a run of 9-2 (17-23, min. 13). From there on in, the guests bossed proceedings with some fine minutes from Causeur, Thompkins and Tavares, but failed to pull away from opponents who remained in the game courtesy of high percentages on two-pointers. With Madrid's Cape Verde-born man on the bench, Bentil took charge in the paint and kept his team alive with nine straight points (28-33 at the break).

Real Madrid needed to offer a little more in offense to turn the match in its favour. The team showed patience in the third stanza, moving the ball well and always seeking the best option. Guided by the omnipresent Tavares, who posted points, rebounds, blocks and assists, Madrid began to dominate. Randolph and Carroll supported him in the scoring stakes as Laso's troops racked up a 14-point lead to make it 38-52. The third quarter, which ended with the teams trading triples, saw the hosts cut the gap to eight points (48-56, min. 30).

Madrid forces overtime
Panathinaikos recovered following the emergence of Nedovic ad Papapetrou and some fluid zonal and man-to-man defensive work that stifled Real Madrid. The home side continued the run they started at the end of the previous stanza and gradually reduced the arrears, before completing the comeback with two minutes remaining (68-66). The Whites had various plays to restore the lead but had lost its accuracy on the outside. However, Llull tied things up to make it 68-68 following an offensive rebound with 14 seconds to play and Taylor, following some immense defensive work on Nedovic, kept the Greeks out to send the game into overtime.

Fightback following two periods of overtime
The game became a real uphill struggle when Panathinaikos claimed a five-point lead within the first two minutes. With everything against them, Madrid produced an amazing response. Tavares, Thompkins, with a triple, and Abalde, who was instrumental with six points, turned the scoreline on its head with 20 seconds left to make it 77-79. The hosts then netted two free throws in the next play to force a further five minutes as the Whites' mental strength was once again put to the test. The guests proved themselves to be more than up to the challenge through the outstanding Abalde, who posted 15 points in the 10-minute spell. The point guard shouldered the responsibility in attack to pace the team to a run of 11-15 to secure a victory that Madrid never gave up on following a pair of free throws with seven seconds to play (93-97). On Friday, the team comes up against another household name in Olympiacos (8pm CET). 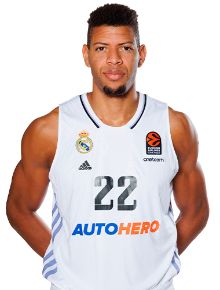 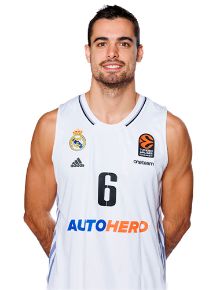