2
Real Madrid Women continued their impressive form in the Primera Iberdrola following a fine team performance that saw David Aznar’s ladies overcome Sevilla at Real Madrid City to extend their current run to three wins in as many games. The hosts bossed proceedings throughout the first half after hitting the front early on. The first chance of the game fell to Marta Cardona, whose effort from a corner drew an excellent save from the Sevilla goalkeeper, who pushed the ball behind for another flag kick.

This time round, Teresa sought to score directly from the corner and her delivery came back off the angle of the crossbar and post and Kaci had the simple task of pushing the ball into the net to put the madridistas into the ascendancy in the eighth minute. The hosts doubled their advantage just after the quarter-hour mark, when Asllani played the ball in from the right and Jakobsson laid it back to Teresa, who lashed a powerful effort into the net. The madridistas were hungry for more and were playing the ball around at great tempo and barely affording the visitors any sights on goal. With 32 minutes on the clock, Asllani saw her headed effort come back off the woodwork and the Swedish duo both had further chances to have further extended the lead before the interval.

Leveller & reaction
The home side were now pinning Sevilla back into their box, but efforts from Asllani (46’) and Robles (48’) failed to find the net. However, Sevilla began to get a foothold and duly halved the deficit through Pina, before Inma restored parity after the hour mark. The madridistas hit back immediately and restored the lead following a move down the right involving Robles, whose cross ended up in the Sevilla net after Teresa Mérida put the ball past her own goalkeeper. There was no let-up from the hosts and within the space of two minutes they put the game to bed. Jakobsson made it 4-2 following some fine individual play in the 80th minute and two minutes later, Thaisa struck to round off the scoring. This is an impressive win and the team’s attentions now turn to Wednesday's rearranged fixture against Levante. 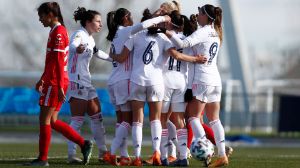 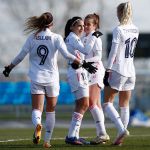