A Bono own goal forced by Vinicius Jr. gives the team all three points at Sevilla.
Ramón Sánchez-Pizjuán

1
Real Madrid have picked up a hard-fought victory at the Sánchez-Pizjuán. A Bono own goal forced by Vinicius Jr. clinched three huge points for Zidane's team at Sevilla. The first half finished goalless, although if one team deserved to be ahead on the balance of play, it was certainly Real Madrid. The visitors wasted no time in crafting the first dangerous opportunity when Rodrygo picked out Vinicius Jr.'s run and his shot across goal when off balance missed the target by inches.

A short time later and Vinicius Jr. was at it again. He charged down Bono as the goalkeeper attempted to clear and only Diego Carlos being on the goal line to head away avoided his team going behind. As the minutes ticked by, Madrid continued to create chances. Vinicius Jr. worked some space on the edge of the box and fed Kroos with 21 minutes gone and the German's curling effort shaved the top of the bar. The last notable move of the half also fell to the madridistas and it was the clearest yet. Lucas Vázquez played in Vinicius Jr., the Brazilian fooled the hosts' defender with a sublime dummy and Benzema's whipped effort was kept out by a superb Bono save with 38 on the clock.

Sevilla came out for the second half looking to dominate proceedings and had a chance to take the lead in the 52nd minute. Navas swung the ball in, De Jong attempted an acrobatic effort, but Courtois was well positioned to keep the ball out. The visitors responded well and got the first goal of the game four minutes later. Great link up play between Vinicius Jr. and Benzema saw Mendy released down the left before the Frenchman played in a low cross and the Brazilian got just enough on it to force Bono to turn into his own net.

Clean sheet
Real Madrid had to work hard out of possession to maintain their advantage. Sevilla couldn't find a way through the visitors' defence and were limited to shots from distance. The first of these was a Gudelj free kick in the 75th minute, which ended up in the side netting and the second saw a nice move from Suso sail over the bar five minutes later. In the 85th minute, Óliver Torres crossed from the right and Ocampos tried an acrobatic finish that ended up in Courtois' gloves. Real Madrid now switch their attentions to the decisive Champions League match against Borussia Mönchengladbach on Wednesday. 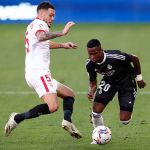