With Real Madrid he won 4 Leagues, 3 Copa del Rey, 2 Cup Winners' Cups, 1 Korac, 1 Club World Cup and 1 Supercup.
It's been 31 years since one of the Real Madrid basketball legends left us. On December 3rd 1989, Fernando Martín died in a traffic accident. Real Madrid said goodbye to one of its heroes when he was just 27 years of age. The tragic event occurred while he was on his way to the Palacio de los Deportes for the match between Real Madrid and CAI Zaragoza.

Fernando Martín left his mark on the club and on Spanish basketball thanks to his quality, courage and character. He won 4 Leagues, 1 Club World Championship, 2 Cup Winners' Cups, 1 Korac Cup, 3 Copa del Rey and 1 Spanish Super Cup with the Whites. Leader on the pitch and idol in the eyes of the fans, Real Madrid decided to retire the number 10 jersey as a tribute.

NBA
As well as his outstanding career as a Real Madrid player, Fernando Martín has a special place in the history of Spanish sport, as he was the first national player to make his debut in the NBA in 1986. He was also part of the Spanish team that won the silver medal at the 1984 Olympic Games. His other achievements with the national team saw him win a silver medal at the 1983 European Championship. 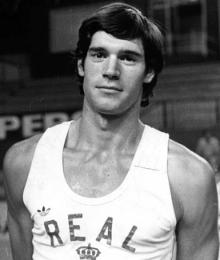