The small forward scored 21 decisive points in the second half to change the pattern of the game.
WiZink Center
92

83
Real Madrid started December, which will see the team play 10 games in 28 days, with another victory in the league. The Whites made it 12 wins in a row to remain undefeated and at the top of the standings. They beat Baskonia at the WiZink Center after an even match that was decided with a superb third quarter, in which Causeur was decisive (21 points and a PIR of 27 in the second half). Deck (15 and 18) and Llull (12 and 12) were also the stand-out performers.

Both teams began with very few mistakes in their game, leading to a very even start to the encounter. Henry, for Baskonia, and Tavares, for Real Madrid, led the charge in attack in the opening exchanges. An outstanding Deck, with 7 consecutive points of his side's 9 in this period, led Madrid to its first scoring run in the 8th minute. With the score at 15-17, the leaders put together a run of 10-2 to finish the first quarter 25-19.

An open game
The game moved up a pace in the second 10 quarter, this time with Baskonia taking the lead thanks to an inspired Dragic (9 points in 4 minutes) and the three-point success from Polonara and Kurucs. Madrid was thwarted by the visiting defence, made worse by the lack of offensive rebound. Llull (7 points) and Thompkins (5) kept the team going against an opponent who won the second quarter 15-24 and went 3 up at the break (40-43).

The Whites improved in the second half and were more solid in defence. They showed great aggression and in a five-minute spell they played at a spectacular level at the back, closing the rebound and denying comfortable shots, with Baskonia unable to score. The 15-0 run changed the pattern of the game and was largely down to Causeur. The Frenchman, who came on for the first time in the match, was the Madrid driving force in attack with 12 points (3 three-pointers) in a third quarter in which Laso's troops moved 28-15 ahead of their opponents. They sensationally went from 40-43 at the end of the first half to 55-43 in the 25th minute.

A team effort
Baskonia fought back through Henry and Peters but ran into a solid Madrid defence that managed to keep the visitors at arm's length. Abalde and Thompkins added to the Madrid offensive by neutralising the opposition points with key baskets. Meanwhile, Causeur continued with his exhibition, finishing with 21 points in 19 minutes, ending any hopes Baskonia had of a late comeback. Llull sealed victory with a superb two-point play and three throw (92-83, min. 40). The team must now turn its attention to its next EuroLeague match against ASVEL in less than 48 hours (Friday, 9:00 pm CET). 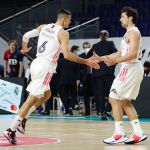