The captain is one of 15 defenders nominated for this best XI chosen by uefa.com users.
Sergio Ramos has been named on a 50-man shortlist for the UEFA Team of the Year 2020. The madridista captain is one of the 15 defenders on the list and has made the best XI on eight previous occasions. Ramos won LaLiga and the Spanish Super Cup with Real Madrid in 2020 and is also in the running to be named FIFA The Best Men's Player.

The uefa.com users can now cast their votes for the best XI of the year. The nominees have been put forward by the UEFA editorial team and validated by a panel of technical observers, based on players' performance in European and domestic competitions from January to December 2020. 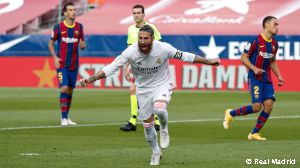