Upon arrival, they travel to the Sheraton San Siro Hotel, the team's base during their stay. This evening, from 7pm, Zidane's team will train for the last time before the match against Inter Milan. 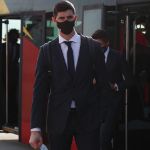