The Whites return to the San Siro to take on Inter Milan in matchday four of the Champions League Group Stage.
Real Madrid will play their next Champions League match on a special stage: the San Siro. The Italian stadium is the place where the Eleventh European Cup was won and now Real Madrid go back to play the matchday four Group Stage game against Inter Milan (Wednesday, 9pm CET). The Whites are back in Milan after the historic win on 28 May 2016.

That day, Zinedine Zidane's side took on Atletico de Madrid in the final of the Champions League. The Whites took the lead thanks to a goal by Sergio Ramos, but Carrasco sent the match into extra time. The match remained all square until the penalty shootout, in which Lucas Vazquez, Marcelo, Bale, Ramos and Cristiano Ronaldo converted from the spot to win the eleventh European Cup. This was the beginning of a landmark in the history of football, as it was the first of three consecutive Champions League wins, something that has only been achieved by the Whites in this format of the competition. 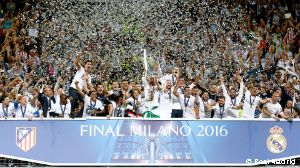