The unbeaten league leaders welcome one of the best away teams on match day 12 (8:00pm CET).
Real Madrid come up against Baxi Manresa on match day twelve in the League, looking to maintain their flawless run of games at the WiZink Center this week, having already seen off Maccabi and Fenerbahçe in the Euroleague double-header. Unstoppable in the league, the table-toppers are 10-0 so far heading into a tough clash against eighth place and one of the most effective sides on the road.

The madridistas are enjoying a wonderful run of form of late, hitting ten successive wins across the League and Euroleague thanks to a streak which began back on 25 October against Movistar Estudiantes. Real Madrid have proven faultless in November, winning all seven games to date. Today's opposition, Baxi Manresa, have 6 league wins to their name so far, having played one more than the Whites. They lost against Iberostar Tenerife at home last time out but have been stronger away, with 4 wins in 5 clashes on opposition territory.

Real Madrid will also have to deal with the fatigue which comes with having played 3 games inside 5 days. Their rivals will boast fresher legs, having not played for the last 10 days. But Laso's team has a deep squad to call on and continue to reap the benefits. On Friday, 5 players finished in double PIR figures, led by Abalde. Two days prior, it was Randolph and Deck posting the points. Today's encounter pits two of the competition's best offenses against each other (87.6 points per game for the madridistas, to the visitors' 84.7). Baxi Manresa sit third in assists, but also have the highest total turnovers in the league so far.

Madrid's consistency lies in defense
The Whites are always at their best when their defense is on song. It's the area where they stand out well above Baxi Manresa, conceding just 73 points per game, 12 less than their opposition (85.1). That stat has been even better over the last 4 games, where they've restricted their opponents to an average of 68 points, despite being up against the talents of Urbas Fuenlabrada, Crvena zvezda, Maccabi and Fenerbahçe. The visitors, who will be without Tabu and Báez but will be pleased by the return of Jou, are more dangerous near the hoop. Eatherton, Mason and Dani Pérez are the key point-scorers. For the hosts, Carroll sits on 659 triples, meaning he's just 3 from eclipsing Herreros as the second highest three-point scorer in Real Madrid history in the league. 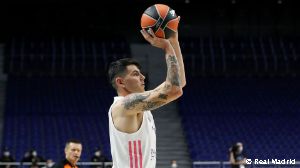