A new milestone for the overseas player who has played the most matches for Real Madrid with 654, with 361 of these coming in the league. Carroll averages 1.8 three-pointers and a 43.8% success rate per game in his 10 seasons with the Whites in this competition. This is the highest percentage among the top 10 Whites' three-pointers in history. Carroll has a spectacular record in one of his specialities, the three-point shot. Only his teammate Sergio Llull, who leads this classification with 779 points, remains ahead of him. 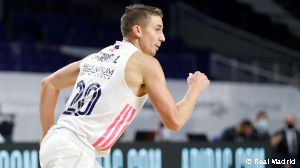